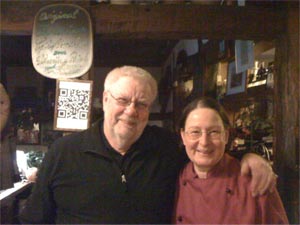 Huebert Steuer and his Wife

The couple in the picture are Heubert Steuer and his wife they run a restauraunt /accommodation service in the oldest wooden frame house in Germany. The house which was built in the 14th century and has been in Heubert’s family for the past 400 years. In the picture to the left of Herbert’s shoulder is the subject of this article a QRC(Quick response Code), framed and placed on one of the central pillars of the restaurant.

This code when scanned by a mobile phone with the relevant app installed, will direct the phone user to the web site www.steuer-garlipp.com .  Heubert explained proudly that people could use the code to store his web site address for use when they were away from the place.  Neither Heubert nor his wife are in the first flush of youth but they have embraced and are very excited about this technology.

A Quick Response Code, or QR Code in its abbreviated form is a type of two dimensional (or matrix) barcode which was first created back in 1994 for use by Toyota subsidiary Denso Wave in the automobile industry.

It is similar in many ways to a standard bar code but it offers the ability to store more data.   It has been widely adopted throughout the world to share data such as website URLs, contact details, general text and advertising products

Once I scanned Hubert’s bar code into my phone the web address which is encoded into the image which resembles a cross between a word puzzle and a bar code, Hubert’s web site popped up on my phone, the address of his website was also stored in my phone for reference later on.

There are a wide variety of applications of QRC codes at present through out the world, including Heuberts, I would like to suggest one more application that is to place a QRC at each of our heritage sites and panoramic views, the aim of this is to provide more information to people.  Monuments such as Gallarus Oratory could have a QRC code displayed at the site which would link the visitors to a web site which would provide historical, archaeological and anecdotal information on the site, in one or more languages and possible other useful pieces of information such as the nearest café, or B&B.  Can you think of any uses for these codes?, as Heubert said it is fantastic.

http://www.quickresponsecode.com/ is one of many web sites that provide a free service generating QRcodes, These sites include Kaywa (qrcode.kaywa.com), Qurify (qurify.com/en) and Delivr (delivr.com/qr-code-generator). The Google URL Shortener (goo.gl) will also create a QR code file from a shortened link.