The hammer has hardly changed in 2.5 million years 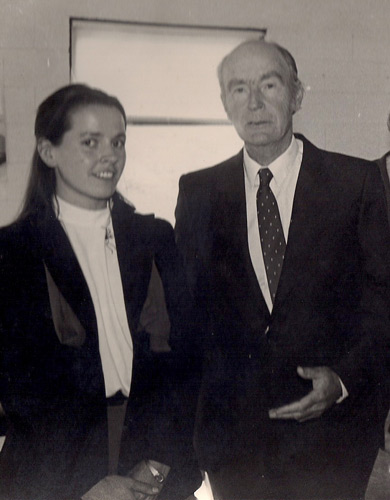 Joan Maguire with President Patrick Hillery in the Computer Training Room in Ballyferriter, 1984

The first personal computer, the apple I was developed in 1978, which brought about the era of personal computing. Before that all computers were large, and were housed in special air conditioned rooms, with terminals attached. Unless you worked in the industry, the only sight you got of one, apart from pictures in books, was when you went to the bank or checked in for a flight.

The early IBM PC’s, were among the first personal computers. This was the technology used in the courses that I taught here, thirty years ago. They had DOS 1.0 operating system, WordStar as the word processor, Supercalc as a Spreadsheet, Peachtree accounting system and DBaseII as the Database. There was no sign of Windows or laptops. Dingle had no ATM machine. The World Wide Web did not exist.

The personal computing era has continued from that time to this. During this era, personal devices have become smaller and have increased in functionality.

A smartphone today, can do so much more than one of those Desktop PCs. It is portable, so much so, it can fit in your pocket. It can store more information and photographs. It comes at a fraction of the
£3,500 price tag of the IBM PC, for the computer alone, each one of the pieces of software cost hundreds of pounds and the printer also cost extra.

A smartphone can connect to the Internet and give the owner access to Facebook and Twitter, and thousands of small applications (apps) at a very reasonable price of just few euro . It is also a phone. These smartphone devices which were probably beyond the dreams of people in the 1980’s are now commonplace.

The rate of change in technology is extraordinary, and is unusual. A carpenter uses a hammer, it was there when he/she was young and it is still there. Carpenters and builders in the future will probably still use hammers. Hammers have been around for 2.5 million years.

With more and more people throughout the world employed in researching and developing technology, we can expect the rate of change to continue and to even increase. The plain truth of the matter is that we don’t adapt as quickly as the technology develops. If you buy a new smartphone or pad by the time you have learnt to use it has been surpassed by something else.

We need to be discerning before adopting new technology, in the words of one of my past students, “Computers I know all about them, and I want to have nothing to do with them”. This reaction is probably not common place, but, it shows that this person had considered whether they wanted to adopt the new technology and had decided against it. How many times with new technology do people assess the technology and the pro’s and cons of it , before they engage with it?

As we come near the end of the Personal Computer Era, and we look forward to what has to come. Ask your self the question before buying or engaging with technology. What will this do to improve my life or that of, the people around me.