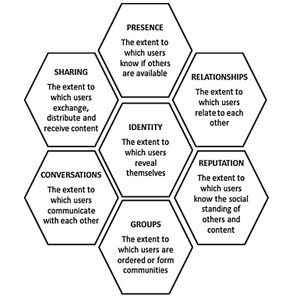 Popular social networks have only been in existence for 10 years and in that time they have  become an intrinsic part of the lives of all who use technology. The 15 most popular social networks  in the world today are, Facebook, Twitter, LinkedIn, Pinterest, Google Plus +, Tumblr, Instagram, VK, Flickr, Vine, Meetup, Tagged, AskFm, MeetMe and ClassMates.

Block 1:. Identity: Every person has a profile on a social media site, in this profile they can choose to share a lot or a little information about themselves.  They can be accurate or they can invent.

Block 2:Conversations:  This Block describes how people communicate using social media, and what are their motivations.  Are they joining to find love, to share ideas with like minded people , to increase self esteem or to get a reaction, the list of reasons is probably as varied as the variety of people using the network.

Block 3: Sharing , Social media is described as such because it implies that people are being social and sharing something with another member of the network.

Block 4: Presence: Some social media sites such as Four square will connect people based on their physical location.

Block 5: Relationships: Using social media people establish relationships and connections . These can be made through sharing information, meeting up, or just listing each other as a follower or friend

Block 6:Reputation: A reputation can have different meanings, but at its core in a social network it’s a sense of identifying the status of others and yourself within the network.

Block 7. Groups: As people’s social media network grows they need to group people into different categories so as to manage their communications with them. e.g. Twitter’s lists and Facebook’s public and private groups.

Packs of Lego contain different shaped and coloured bricks which can be joined together to create a structure or a toy. Each social media site is slightly different and places emphasis one of the blocks more than the others. e.g. Linked in places a  strong emphasis on  identity, Facebook on relationships, Foursquare on presence and YouTube on sharing.

According to nemedia.biz each social network site crafts a careful balance between each cell of the honeycomb to achieve their particular design. They have published a diagram that lays out the 7 building blocks with a darker color block, indicating greater a emphasis on that particular social media building block within the site. 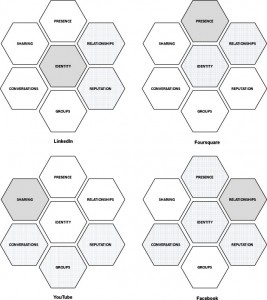 According to this LinkedIn places most emphasis on the persons identity, Foursquare on presence, YouTube on sharing and Facebook on relationships.

References used for this article: